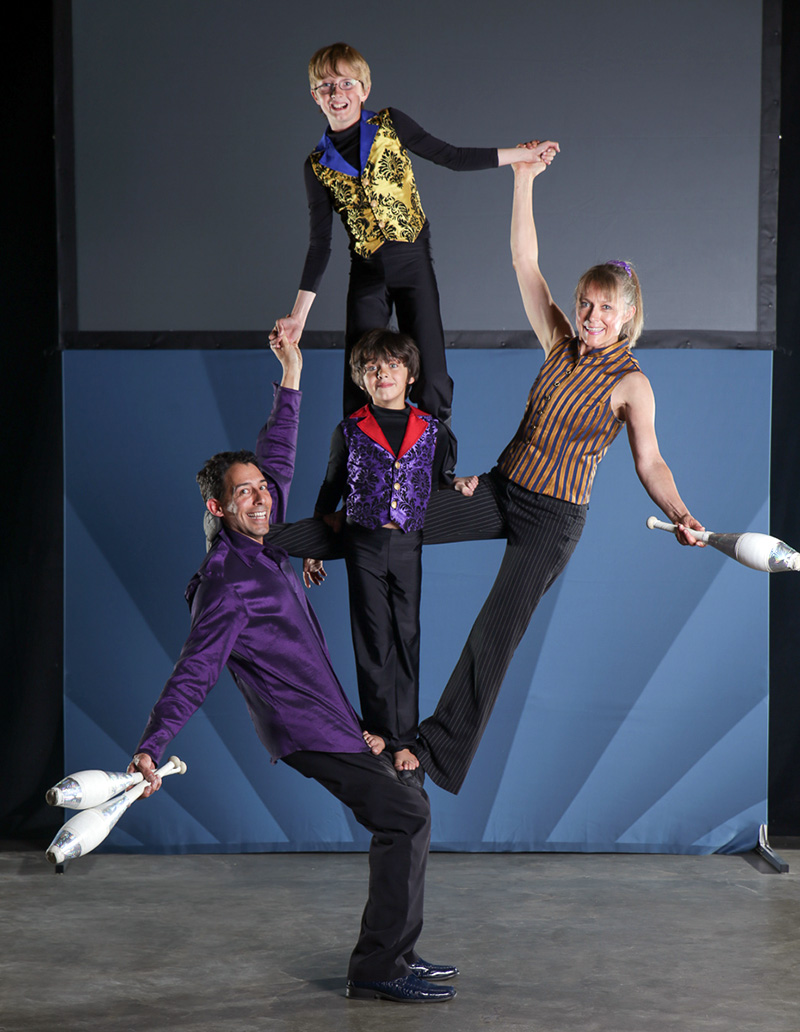 You’ve seen their skills in numerous movies, TV shows, and commercials. Now experience the ridiculous feats of Jack & Jeri Kalvan LIVE! Jack is a master of unusual skills. A full-time entertainer since the 1990s, Jack is a world-class juggler, engineer, and inventor. Jeri Kalvan is a former teacher turned Hollywood stuntwoman. In 2005, they joined forces to create a comedy variety show that all ages could enjoy together. Starting with traditional circus arts like juggling, acrobatics, and unicycling, they’ve incorporated a multitude of other ideas, fascinating audiences with flowerpots, slinkys, art supplies, tennis ball guns, video projectors, giant whoopee cushions, and much more. They’ve even got their two sons, Max (12) and Oz (9), into the act. This extraordinary family has received rave reviews from cruise ships, fairs, festivals, theaters, and corporate events. They’ll have you on the edge of your seat, and rolling on the floor laughing at the same time.

More about Jack
Jack Kalvan earned a degree in Mechanical Engineering from Carnegie Mellon University. A year later, he quit a job in robotics at IBM Research to follow his dream of showing off and making people laugh. Since the age of 12, Jack has loved practicing juggling and other circus skills and creating uniquely entertaining ways to present them. He has performed more than 3,000 shows in over 200 cities around the world, from cruise ships to the White House in Washington, DC to the Wintergarten in Berlin to Cirque du Soleil. TV appearances include: The Tonight Show, Conan, The Drew Carey Show, NCIS, and Days of our Lives, and numerous commercials. Movie credits include: Alice in Wonderland, Water for Elephants, and Coyote Ugly. Well-respected in the juggling community for his skill and creative innovation, Jack has won several gold medals and even set some world records. Since 2006, Jack produced XJuggling, the Extreme Juggling Competition to help promote the creativity and excitement of juggling. Jack currently enjoys performing with his wife, Jeri, also a talented juggler and acrobat. They are based in Los Angeles.

More about Jeri
Jeri Kalvan’s experience with acrobatics and stunts began as a small child when she was inadvertently dropped on her head. As a teenager, she competed in elite gymnastics and excelled at many other skills, including skydiving, cliff jumping, and barefoot waterskiing. Jeri Kalvan holds a masters degree in Curriculum and Instruction. For ten years, she enjoyed teaching movement and circus to elementary school children, motivating them to learn difficult skills and create group performances. Jeri’s love of circus skills led to working as an aerialist, juggler, acrobat, circus trainer, and rigger in the U.S and Australia. In 2000, her brother, stunt coordinator Jeff Habberstad, assisted her entry into the film industry, where she met success as a stunt actor, stunt double, and stunt coordinator. Jeri’s film credits include working as Kirsten Dunst’s stunt double in SpiderMan 1 & 2. TV credits include stunts for Buffy the Vampire Slayer and Conan O’Brien. She has also doubled Marg Helgenberger, Alyson Hannigan, Ashley Judd, Jennifer Garner, Calista Flockhart, Amy Irving, and Bryce Howard. Jeri lives in Valley Glen, CA with her husband Jack, and sons, Max and Oz.