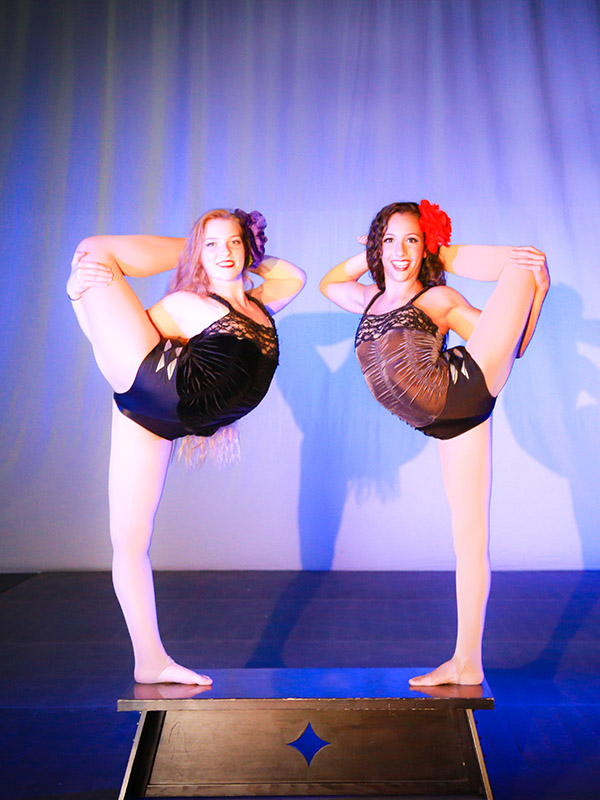 Stephanie Cadd started training contortion and circus arts almost two years ago, building on six years of dance experience. She began training with Tsengee Byambadorj who introduced her to Pendulum Aerial Arts, where she now trains. Stephanie started dancing the age of 13 and quickly fell in love with it. She began dancing on the middle school dance team, then trained at Forest Grove Dance Arts where she learned many forms of dance, including ballet, lyrical, jazz, hip hop, acrobatics, tap, and improv. Two years after beginning her training with Forest Grove, she joined the competition team, competing with lyrical solos. She took home first place overall soloist and highest score at Starpower and was awarded the Power Pak accomplishment, dancing alongside Power Pak in Orlando, Florida. Stephanie was also awarded a scholarship and qualified for internationals in Las Vegas, Nevada at Thunderstruck dance competition. In addition to competitions, Stephanie has danced at the Portland Blazers pre-game and halftime shows and the San Diego Holiday Bowl halftime show. She has also danced in many programs, including Northwest Dance Project summer dance intensive in Portland, Oregon and Cornish College of the Arts summer dance intensive in Seattle, Washington. Follow Stephanie Cadd on Instagram.

Sydney Nagy is 15 years old. She has been an aerialist and contortionist with Pendulum Aerial Arts since the summer of 2013 where she is now a third-year member of the Professional Training Program and the junior company. Prior to this, she was a competitive rhythmic gymnast for 7 years where she was a 5-time Junior Olympics competitor and a 4-time member of the National Future Stars team. She made a conscious decision to stop competing in the sport of rhythmic gymnastics and transition into the performance-based discipline of aerial and contortion due to many factors. Sydney wanted to perform for an audience and tell her story without a script and without being in front of a panel of judges who were only concerned with whether she executed a skill properly rather than feeling the emotion or understanding the story she was trying to convey. She made the decision to switch from rhythmic gymnastics to aerial dance and contortion because, instead of a competitive energy in the room, she entered a supportive, community-based environment where she could not only challenge her physical abilities, but also test her mental limits and freely express herself through innovative choreography. Follow Sydney Nagy on Instagram.

A few words from Stephanie:

Creating this act with Sydney has been the highlight of this past year for me. It has been inspiring to see our progress throughout the creation of our act. We were able to grow together as artists and work as a team. It was really about being a team and working together that made this act possible. A lot of the movement and tricks in our act require trust and the ability to move as a pair not as an individual. We decided that the word intertwined was a good theme to influence the creation of our act. Our movement was based on this theme and helped us stay connected throughout the process. It has been such an amazing experience for me and I’m so grateful to have such a wonderfully talented partner and amazing director/coaches to help us throughout this year. I’m so excited for everything that is to come.

A few words from Sydney:

Stephanie and my duo contortion act is really about being connected and working as a duo––not just two soloists. We have many tricks in our act in which the success of the trick is based on the quality of the teamwork, and the aesthetic of the tricks are also dependent on how well we work together. We choreographed our act with the theme of “intertwined” or “interconnected” in mind, and have places or shapes in which we demonstrate this theme literally by being intertwined, and other times we demonstrate our connectivity through our synchronized movements or our visual connection with each other. We have been working on this act for almost six months, and throughout we have had many wonderfully artistic and talented people watch it (Tsengee, Suzie, Tanya, Madi, etc) and give us feedback on how to improve and how to grow as artists, contortionists, and duo partners. This act is one of my personal favorite contortion acts that I have ever created and/or been a part of, and I am thrilled to go on this journey with Stephanie to LA to show our act to yet another set of talented and artistic eyes. 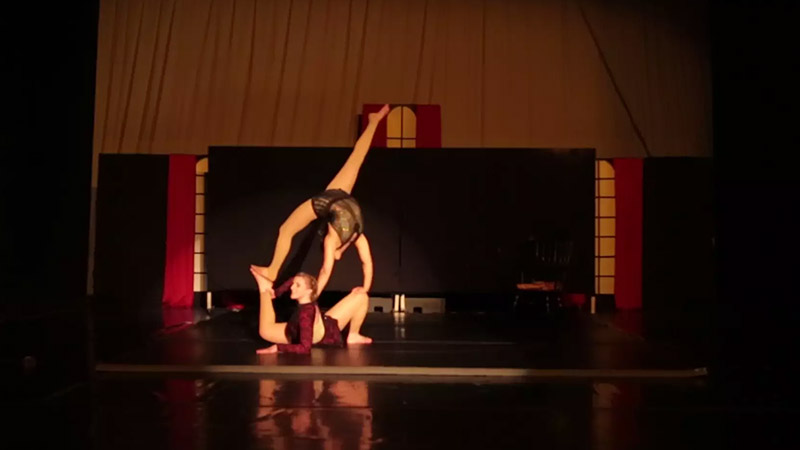 Pendulum Aerial Arts is thrilled to support our talented students Stephanie Cadd and Sydney Nagy who are everything Pendulum strives for in its students: strong, bold, and sophisticated. And young women who inspire and are role models to all they work with. We are so proud of them….

Pendulum Aerial Arts was founded in 2000 and is based in Portland, Oregon. Under the direction of Suzanne Kenney, Pendulum has been an innovator in circus in the US in educating youth and performance. Pendulum specializes in contortion, aerial arts and fusing theatre with storytelling to create artistically compelling stories.