We caught up with the Circus Star USA 2015 winner, Sai’len Jaeger, to get his advice for performers competing this year – as well as aspiring circus arts performers in general – on building an act, engaging the audience, and lessons learned. Read on to hear from Sai in his own words.

Make sure that whatever you do, it’s engaging the audience. Circus is not classical theatre, so don’t be afraid to break the fourth wall. If your act is sexy and sensual, make eye contact with every person in the crowd and make them think that you want to take them home after the show. If your act is about the sadness of losing someone, let them see the tears rolling down your cheeks, make them feel the pain of loss as well. Don’t be afraid of evoking emotions, both in yourself and in the people watching you. Remember, the audience is there to be entertained, they WANT you to lead them wherever you plan to take them.

One thing he’d do differently

I wish that I had come better prepared, I tried to put too much into my act and it wound up being a mess ultimately. I wish I had analyzed it better to look at the parts that were really important and what was just pointless filler.

How things have changed for Sai

So much has happened in the past year. I moved away from home to land in Las Vegas, where I have had the honor of training with some of the best artists in the world. Since living here, my life has consisted of training, auditions, traveling, and trying to keep my car running. It’s been a ride, and there is still a long way to go. It’s pretty exciting, and I look forward to seeing what the future holds.

Don't be afraid of evoking emotions, both in yourself and in the people watching you. Remember, the audience is there to be entertained; they WANT you to lead them wherever you plan to take them. 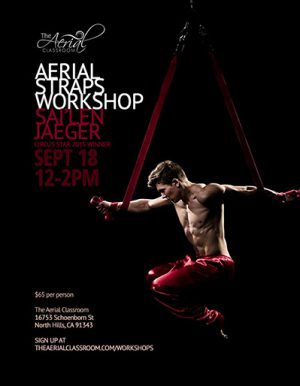 Sai will teach an aerial straps workshop at The Aerial Classroom on Sept 18, 2016, the day after the Circus Star 2016 competition. $65 per person. Spots are limited, so be sure to sign up in advance!

Sai is a pretty humble guy, so we’re going to do a little bragging for him. Here he is working on a project with Britney Spears. Can’t wait to see it!

Sai made it through the Cirque du Soleil auditions to earn a spot in their database! Circus Star judge and head of casting for residence shows Julien Panel is in the back row, second from left.

Well, today, I auditioned for Cirque du Soleil, and I made it through to the end somehow. Now we wait to see if/when a position opens up haha. #cirquedusoleil #circusartistcirque #circus #cirque #whatjusthappened #aerial #aerialist #audition #performer #nowwewait #excited #aerialmen #circusstrong

Sorry, the comment form is closed at this time.